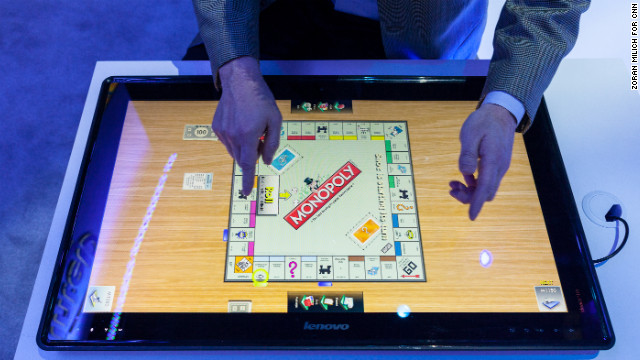 Imagine walking into your local coffee shop, pub or even your home and sitting down at an interactive computerised coffee table where you can play huge board games, surf the net or do anything you’d normally do on a computer, only on a much bigger and collaborative scale.

It might sound like something from the future, but this is exactly what the electronics company, Lenovo, has done; it’s called the Horizon Table PC and will be available to buy early this summer starting from $1699.

The idea is to use the device as if it were a table with a touch screen. It sounds like a cool novelty, but how would you move it about? The screen measures 27 inches and weighs 7.7kg. Also, would you really want to use it as a table top? Would it not get full of coffee bean stains or drink spillages in general?

There is a stand attached so it can also be used in a slightly upright position, propped up either on a table or the floor, so it would become more like a huge interactive board than a table, but where would such a device be used?

Probably not in a coffee shop, but perhaps other environments where working or playing collaboratively is important. Lenvo has said that the Horizon Table PC will help to bring people together as it’s a multi user device. Also, Lenvo claim that users will be able to experience games in a way they’ve never seen before. It sounds really intriguing.

And if the 27 inch table isn’t big enough, Lenvo has already designed a bigger version called the ‘gamma’ which is a massive 39 inches. There was a time when technology was getting smaller and smaller, but is it now heading in the other direction? How big will Lenvo go?